Life is good. Today, Apple’s new Ipad went on sale, and yesterday, March 15th, its stock topped $600 a share. The company’s market size is larger than the entire US retail sector, Exxon (formerly ’s most valuable company), all 526 NFL franchises, or the total of the cash holdings of the US government (app $73 billion). There is even talk, that since the company has moved past half a trillion in market size, climbing from $500 a share to $600 a share in only 24 trading days, maybe it is not so outrageous to think that the stock could hit $1 trillion in market size. 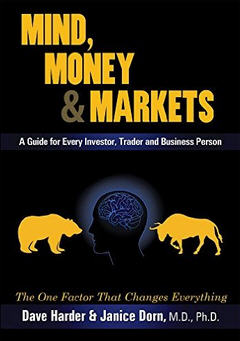 Yet, something appears wrong with this story of “unlimited wealth”. Something seems familiar about this story from our past. The headlines today, read like ones I have read before.

Thirty-seven investment banks recommend either a "buy" or a "strong buy." None recommend a "sell" or even a "hold."

On any given day the volume of Cisco shares traded is the equivalent of every man, woman and child living in --having hit 33 million as recently as March 9….

Paul Weinstein, an analyst with Credit Suisse First Boston, believes a $1 trillion market capitalization (stock price multiplied by shares outstanding) is within reach in a few years. He said Cisco's stock has increased 1,000 times, a perfect 100 percent annual return since it launched its IPO in 1990.

"We humbly submit that over the next two to three years, Cisco could be the first trillion dollar market cap company--and don't think they wouldn't love it," Mr. Weinstein wrote in his "strong buy" recommendation.

As of March 14, Microsoft's market cap stood about $510 billion, compared with Cisco's $465 billion, which is threefold the annual revenue of the state of .

Apple’s stock run-up to $500 earlier this month had some wondering if we may see the first trillion-dollar public company around the corner.

It's something that hasn't happened before but a number of analysts insist the computer and software company's stock remains underpriced, suggesting that it could finally be the one to break the trillion-dollar barrier in market cap.

But those with long memories recall that another Silicon Valley company, Cisco Systems, appeared on a similar path to trillion-dollarhood back in the days of the dot com bubble.

So it's worth remembering that in the stock market, what goes up has a way of also going down, and it's usually best not to get too far ahead of things. Since hitting a high of $526.29, Apple has slid back to around $511 a share. 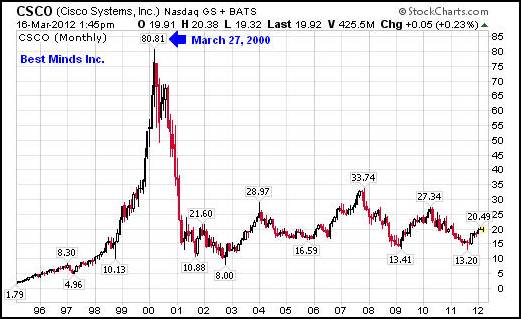 What happens when one stock is owned by 216 hedge funds, 788 stock mutual funds, and makes up more than 17% of the NASDAQ 100 index? What if the NASDAQ 100 became too concentrated in a few stocks, until almost 50% of what an investor owned were only 5 companies? What happens if the crowd starts to sell this stock, seeking to lock in parabolic gains?

Apple Inc was cut to 12.3 percent from 20.5 percent of the index in April 2011, but a surge in price has pushed it back up to 17.2 percent -- and the other big names have seen their share prices balloon as well.

A rebalance of the index will be triggered if Apple grows to more than 24 percent, or if the collective weight of all components over 4.5 percent exceeds 48 percent.

Along with Apple, the four names dominating the average are Google Inc , Microsoft Corp , Intel Corp and Oracle Corp . The growth of the top five companies increases the likelihood that the biggest names in the average will soon make up 48 percent of the Nasdaq 100 <NDX>.

"When you construct an index that is supposed to be a market benchmark, it shouldn't just represent a handful of names," said Bronzo.

When you look at the information above, does it look like investors, both retail and professional money managers, have learned anything from what took place in March 12 years ago? Have investors, advisors, and money managers become so confident in the smooth ride up from a bottom in November that they BELIEVE whatever story endorses their investment savvy in deciding to get on this rocket? What will happen if a few managers decide to sell 10% of their holdings in order to take gains and trim their over weighted positions, or something from the real world causes investors to become less confident in equities? 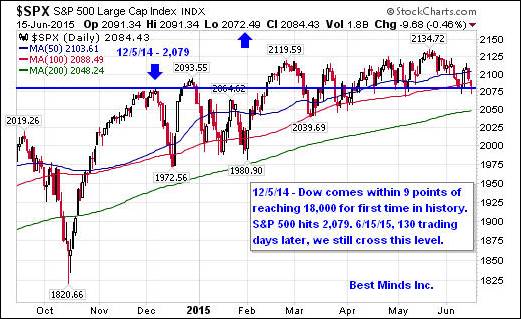 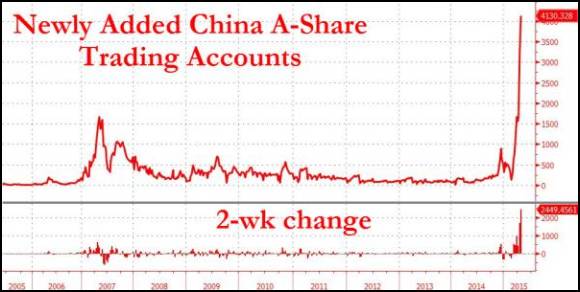 As we close out another options week, we have seen the Dow climb 13 straight weeks over 60 trading days, closing down more than 100 points only twice in this stretch. Those selling out or going short appear as anything but fools, while those holding on or buying in appear to be geniuses. Yet we all lived through 2000 and 2007, so why not look at some numbers, as I did in my May 2, 2011 article, The Gallery of Crowd Behavior Returns, to see if we can discover any patterns with the two largest stock bubbles in American history. 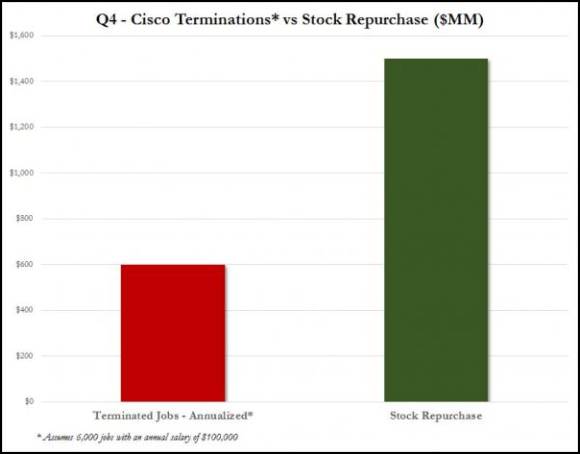 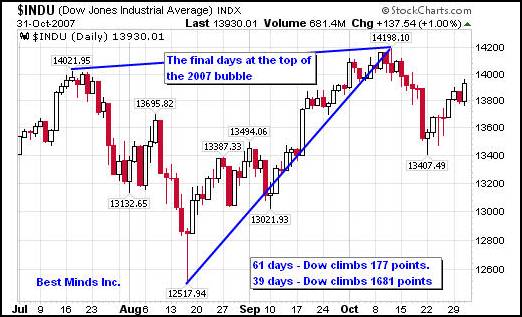 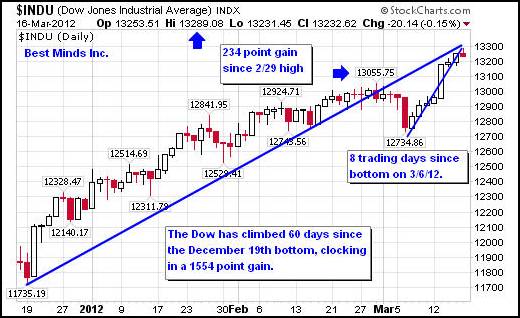 As we can see from the three charts above, the last 60 days, has produced a smoother ride up than the final days into the top of 2000 or 2007, thus providing such a positive emotional experience for investors and traders worldwide, that preparing for the latest credit bubble to burst is off the radar screen of millions. However, if we look at debt levels, the greatest lie in modern history has been and continues to be that by handing our money and lives over to a small group of individuals to centrally plan a continuous stream of trillion dollar (or euro or yen) bailouts, that we will continue on the road to higher “success”. 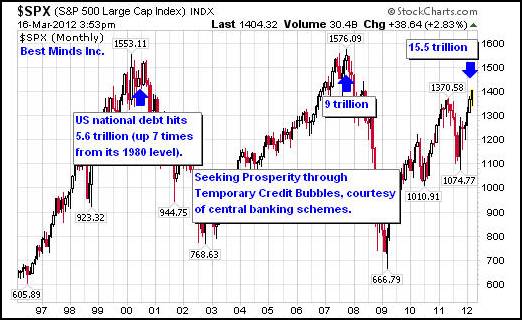 On November 16, 2011 the US National Debt topped $15 trillion for the first time. On November 25, 2011, Apple stood at $363. On March 16, 2012, the US National debt stands at $15.5 trillion, and Apple topped the $600 level yesterday. The US national debt has grown by a half a trillion in 4 months, and Apple has seen its market cap grow by almost a quarter of a trillion in 4 months. My bet is that one of these will continue to climb strong, and the other will start descending soon. But of course, who am I to question the wisdom of “the market” and rising debt levels.

“If you go into these offices [stock brokerage offices] when stocks are rising, you will find a lot of people buying stocks. What I want you to notice is that they are all buying. And they always buy when stocks are on the upward grade. Probably one person out of twenty of your people out West play the other side of the market, and sell short. All the rest buy…..Now remember this thing, when stocks are moving up, as they now are, it’s the worst sort of time to buy either for investment or speculation. But you people out West will never learn that fact, no matter how hard you get hit, no matter how much you may suffer. You come back again to the game on each rising market, only to be among the losers when the next bear market comes along, as it inevitably does. …You are like a flock of sheep following after a bell weather. You never sit down and think and ask any questions. Now it’s this fact that Wall Street banks on about once a year. The time to sell is when everybody out West is buying.” [The Confessions of a Monopolist (1906) Frederic Clemson Howe, pg 54]

The quote on the banner of the Best Minds Inc website has been the same since going live in 2005. “Those who cannot remember the past are condemned to repeat it,” by George Santayana. It seems more pertinent today, 7 years later, than it did then.

If you are interested in our most comprehensive research and trading commentary, consider a subscription to The Investor's Mind: Anticipating Trends through the Lens of History.

Best Minds, Inc is a registered investment advisor that looks to the best minds in the world of finance and economics to seek a direction for our clients. To be a true advocate to our clients, we have found it necessary to go well beyond the norms in financial planning today. We are avid readers. In our study of the markets, we research general history, financial and economic history, fundamental and technical analysis, and mass and individual psychology.

Disclaimer: Nothing in this communiqué should be construed as advice to buy, sell, hold, or sell short. The safest action is to constantly increase one's knowledge of the money game. To accept the conventional wisdom about the world of money, without a thorough examination of how that "wisdom" has stood over time, is to take unnecessary risk. Best Minds, Inc. seeks advice from a wide variety of individuals, and at any time may or may not agree with those individual's advice. Challenging one's thinking is the only way to come to firm conclusions.